The plan was to shake off the New Year’s Eve hangover and embrace the second day of the year with vim and vigour, starting as I meant to go on with smiles for everyone and a super productive day at work.

The reality was waking at 7.15am to a box of cold pizza on my bedroom floor and a feeling of dread so palpable it could have raised the dead. Frankly my fellow commuters would have been more likely to see the Pope than my pearly whites on the train this morning – by a country mile.

Despite the promise that a new year brings – the opportunity to wipe the slate clean and start afresh, the chance to leave bad habits behind and forge good ones in their place – it’s often as early as the first day back at work that the cold reality hits. The stroke of midnight on New Year’s Eve has not, as anticipated, brought with it a Cinderella-style transformation. Nothing is going to magically change, and in order to make things change you must invest considerable time and effort into achieving it. For many that realisation alone is enough to get them reaching for the biscuit tin and pouring a stiff drink.

But whilst for many the ink has barely dried on their shiny new gym membership before they’re sneaking a burger in the fast food outlet next door (which they’ll be torturing themselves about for the next 363 days), for those who are serious about making meaningful changes in their lives the new year can offer the perfect catalyst towards success.

I’m hopeful, as I embark on this 365 day writing challenge, that I no longer fall into the former category of gym-dodging burger-eaters (well, only at weekends), and instead fall (or rather firmly place myself) into the category of new year go-getters.

And you know what? My first day back wasn’t so bad after all. 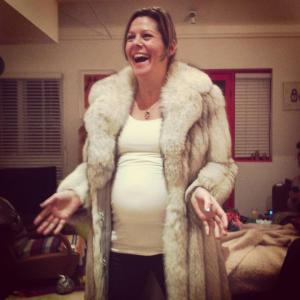 Today’s photograph is to celebrate the birth of my very good friend Caroline’s baby, the soon-to-be-formally-named Wibble. This photo was taken a few weeks ago at the baby shower, and I can’t believe he’s finally with us! Born on 1st January at 5.30am, he is the first baby in my close circle of friends and a fabulous reason to celebrate the new year 🙂 x