The pub was steeped in history. Charlotte could feel it the moment she walked through the door. She stooped so as not to hit her head on the dark wooden beams, which were bedecked with brass casts of horse shoes and other relics of the time in which the building was conceived. There was a coat rack by the door, which she duly deposited her rain-soaked jacket onto. She turned around and waited for her eyes to adjust to the dimly lit room before approaching the bar. The floor was carpeted, a crimson blanket, the windows partially obscured by heavy velvet drapes of the same colour. Oil lamps burned on every table, the light barely filtering through their thick glass shades. In the hearth a log fire crackled and hissed, sending thick plumes of smoke into the chimney chute about it.

Charlotte took a step towards the bar and faltered, feeling suddenly anxious. Her skin prickled, the hairs standing up for no discernible reason. She surveyed the room again. Only two of the mahogany tables were occupied, one by a middle-aged man who was engrossed in the crossword, the other by a family of four, the parents struggling to control their hyperactive children. Charlotte looked at her watch. It was only quarter past twelve. She supposed the lunchtime rush would soon start, though there was no sign of it yet. Despite the man and family sitting to her left, Charlotte felt disquietingly alone.

A movement out of the corner of her eye made her jump. Her breathing quickened as her eyes darted to the right. She squinted into the dark corner of the room. There was nothing there. She took a deep breath and walked towards the bar, reaching a hand out to steady herself as a wave of nausea came over her. The clinking of glasses alerted her to the presence of a girl, about her age, who was walking out of the kitchen. She stopped when she saw Charlotte, put the glasses down, smiled and asked if she could help. Charlotte ordered an orange juice and fumbled in her purse to find the coins to pay. When the drink arrived a sudden thirst took hold of her and she swallowed it in one go.

It was then she saw him. He stood on the staircase to the right of the bar, so still he could have been a statue. His hair was smoothed against his head, his shirt freshly pressed. Charlotte’s heart hammered in her chest. She looked at the girl behind the bar, who had gone back to cleaning glasses. Did she not see? Then back to his face, weathered and beaten. His dark eyes bored into her. His mouth, lips slightly parted, seemed wanting to form words to speak.

She got there first. 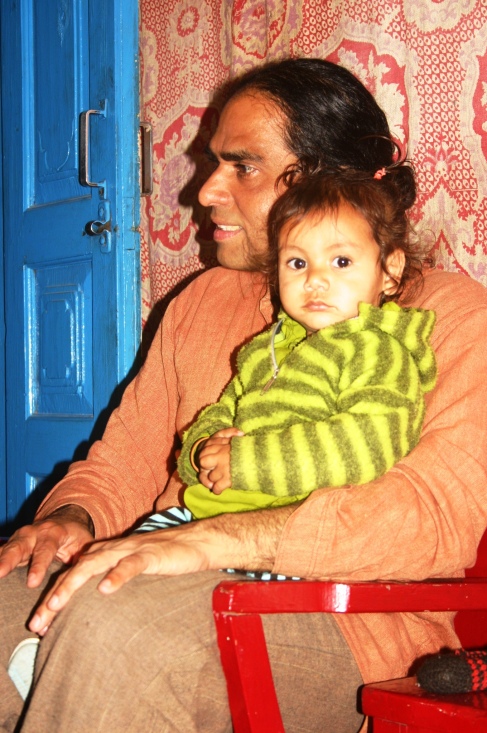 I thought this image was a befitting accompaniment to today’s post. I took it in a makeshift cinema in Vashisht, a hillside village in northern India which is a haven for backpackers. The man in the picture ran the cinema, which was little more than a room with a flat screen television and cushions scattered on the floor. His daughter was so beautiful, like a little china doll. I was quite captivated.