From that sunny July afternoon onwards Johnny and Jenny were the best of friends. Despite her pretty frocks and delicate-as-porcelain demeanour Johnny was delighted to find Jenny was, in fact, a tomboy at heart. When her mother was out of sight she liked nothing more than kicking off her patent shoes, yanking the bow from her hair and rolling up her sleeves so she could get stuck into climbing trees, making dens or whatever other pursuits their limitless imaginations could conjure up.

People joked that they were joined at the hip, a phrase Johnny found particularly distasteful in light of Auntie Pauline’s hip replacement operation, which had seen her incarcerated in the hospital for several weeks not long after the street party where they had first met (and which he fully disputed having played any part in instigating despite compelling evidence to suggest he’d laid a number of Tonka toy cars in her path when she had come to visit).

Some people even suggested Johnny and Jenny would marry, but as every eight year old boy finds such talk abhorrent Johnny would scrunch up his face, pinch his fingers over his nose and exclaim loudly to everyone within earshot that he couldn’t think of anything worse than marrying a “smelly girl.” Jenny would agree that such a proposal was nothing short of preposterous (though not in quite so eloquent a turn of phrase – she was only eight after all), and the two would skip off down the road holding hands as whichever unfortunate soul who had dared to suggest their eventual marital union was left shaking their head and thinking, “shame.” 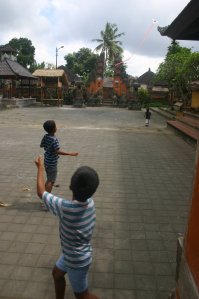 Writing this story reminded me of these boys who I came across whilst walking in Bali. They were having so much fun flying their kite, it was really heart warming to watch.