I’ve been a busy bee setting things in motion for my impending part-time freelance career, and already the fear is being outweighed three to one by excitement. Today I had my first freelance proposal accepted – admittedly it’s only for a book review that will earn me the paltry sum of thirteen Great British pounds, but nonetheless it’s a step in the right direction. I’ve also set up a meeting with a PR agency contact on my first ‘official’ day as a freelance in April. So it’s full steam ahead with all writing-related plans and I couldn’t be feeling more positive.

Now, as it’s been a while since I posted any fiction I thought today was the day to redress the balance. This post was inspired by the current situation in Rome…

It was raining hard when Ellie arrived at the church, yet she was barely aware of being soaked to the skin. She pushed open the ancient metal-studded wooden door and, after a moment’s hesitation, pushed aside the heavy damask drapes and stepped into the darkness within.

Ever since she was a little girl she’d found being inside churches comforting. They had, she thought, a womb-like quality, providing an invisible yet protective barrier between those inside and the real world outside. Whenever she’d had problems in her life she had come here, to this very church; to pray, to repent, to seek forgiveness. Not that she’d ever been given a choice.

Today the church was silent but for the distant flapping of avian wings in the eaves. Motes of dust floated in the musty air. Ellie tread softly across the faded flagstone flooring, worn down from thousands of worshippers’ feet that had trodden this path before her own. She kept her eyes down as she passed row upon row of mahogany pews, each cradling hymn books and orders of service for that evening’s mass.

She approached the altar, too ashamed to look heavenward and meet the non-judgemental eyes of Jesus. Her knees sank into the crocheted cushion, her elbows settled on the hard wood railing. She bowed her head still further, clasped her hands together and closed her eyes, offering her thoughts to a higher being.

No priest was privy to her confession; it was witnessed only by the God she had served for all of her eighteen years. Once finished she allowed herself the briefest of glances towards her Saviour, who was but a silhouette against the wall of multi-coloured light that now streamed through the window behind.

As she rose from her knees she briefly wondered what the Pope would say about her predicament, what advice he would give from his seat in the Vatican. Would he offer her forgiveness? Would anyone?

Feeling suddenly claustrophobic, she turned and walked back down the aisle, her pace quickening with each step. She passed the parapet, pausing for a moment to remember sermons of days and years past. At the font she hesitated again before dipping her finger in the cold water and hurriedly making the sign of the cross. Then, with a final nod to Jesus, she walked to the door, pulled the damask drapes aside and stepped out into the light.

The heavy door shuddered to a close behind her with a bang that made her jump. She turned and traced the warping of the wood lightly with her finger, then laid her palm flat against its surface. A single tear escaped her eye and trailed across her cheek.

Today, she knew, there would be no forgiveness.

This would be her last confession. 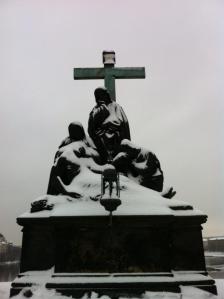 I took this photo on Charles Bridge in snowy Prague a few weeks ago.