When my alarm went off at 6am this morning I was unimpressed (to say the least), and wondered momentarily just how bad it would be if I didn’t turn up to the Wholefoods run I’d spent the last ten weeks training for. But I somehow managed to peel myself out of bed and get my stuff together in time for the 7am taxi pick up.

As we drove towards Kingston I was naively optimistic that the weather may not be as bad as predicted after all, but by the time we pulled up in the market square the snow was falling and it was nothing short of freezing. Clusters of runners stood in every doorway, huddled together for warmth and staring at one another forlornly whispering, ‘why are we doing this again?’

By the time the 16 mile race started I could no longer feel my fingers and was starting to doubt my ability to complete the race (never a good thing at the very beginning), but before I knew it the horn had sounded and we were off. Once my body temperature began to rise I settled into a comfortable stride for the first eight or nine miles, quite enjoying the scenic part of the route beside the river (less so the rather more grim road section).

By mile ten, however, I was struggling – badly. The cold had crept into my bones and my hip joints were so sore I felt like a 90 year old. I’ve never felt pain like that in my hips before (in all of my training runs they’ve never so much as ached – mind you, if it was ever below five degrees in my training runs I tended to exercise in the gym. Oops) and was unsure what to do, so I slowed down for a couple of miles to try and ease the pain. When I realised it wasn’t going anywhere I changed tack and opted to run as fast as I could manage until the finish line, figuring I could at least then stop and rest.

Fortunately the strategy paid off and through gritty determination, sheer bullishness and an inordinately large amount of sugar-based stimulants I made it across the finish line – in a respectable 2 hours and 31 minutes and 29 seconds. I had hoped for a sub 2:30 time, but given the horrendous conditions I’ll let myself off.

It’s a miracle I’ve managed to drag myself to the computer to type this given how much pain I’m now in – walking up the stairs feels like as big a challenge as climbing Mount Everest right now, but it was worth it (I think). If not for the glory of completing the race, then for the huge amounts of roast lamb and chocolate cake I was treated to by my parents afterwards 🙂

Important lesson for next time (yes, I’ve already signed up for another race – this time a half marathon, Run to the Beat, which is at least in September so can’t possibly be as cold as it was today. RIGHT?): Train outdoors even if it’s cold so the unpredictable English weather doesn’t screw you over totally on race day. At this rate I may be loaded onto the plane to New York in a wheelchair on Tuesday (note to Jen: I won’t!!)… 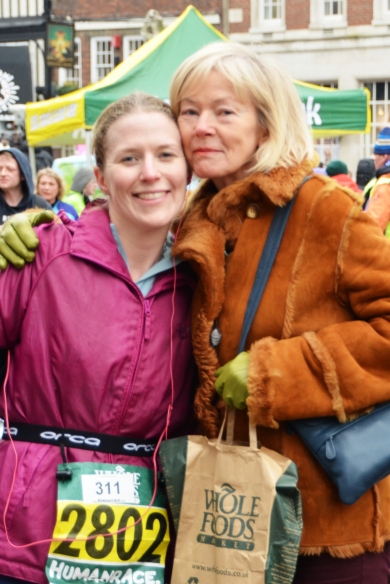