When you live in one of the most famous cities in the world it’s surprisingly easy to forget the myriad reasons why it’s so famous. The views, of course, are self-evident (nothing beats the London skyline as dusk falls over the South Bank), but it’s the hundreds (if not thousands) of attractions, exhibitions, walking tours, wine tastings, cake makings, tea drinkings, secret supper clubs, underground speakeasys [sic] and quirky activities that often get disregarded by the folk who reside here.

Why? Because, after spending five days of the week battling through the crowds on public transport to and from the office – not to mention attempting to juggle catching up with friends, working late and working out – they’re usually too exhausted and/or hungover to do anything other than throw themselves into an arm chair with a cold beer and vegetate for two days.

Most city workers don’t even contemplate a trip to the National Gallery, a cruise on the Clipper boat from Greenwich or a cocktail making master class on their long-awaited weekends. Or, if they do contemplate it, it’s usually too late in the day to actually make it a reality.

And on those rare occasions when they do have the energy for a weekend excursion it’s usually to somewhere outside of London – because after the week they’ve had the last thing they want to do is run the gauntlet of tourists in Piccadilly or Oxford Circus, or any of those other tourist meccas.

But Londoners really should take the time to appreciate the city in which they live. Especially the young professionals who know their time here is limited, that they’ll move on in a few years when another opportunity – possibly the desire to start a family – presents itself. Because it’s often only when you leave a place that you realise how incredible it really was – and feel nostalgic for the things you never did, even though you had the chance. 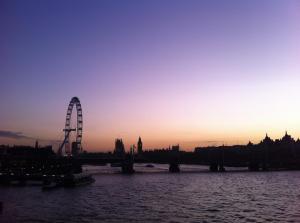 2 thoughts on ““He who tires of London tires of life””