After rising with the lark (well, at 8.30am, as it happens – but for a Saturday that’s as good as dawn) and completing a 5.2km run in an impressive 28 minutes I returned home to begin the mammoth task of clearing out my room and packing for my two forthcoming holidays. The long overdue clear out was in honour of my imminent (it’s five weeks away, but that feels imminent to me) move, which I’m enormously excited about. And the packing, well, the packing speaks for itself.

Six hours after beginning these tasks I’m typing this post feeling both satisfied and utterly exhausted. I managed to get through every cupboard, drawer, box and bag in my bedroom and whilst it was a huge undertaking I made it out the other side relatively unscathed. A sizeable amount of my belongings are now stuffed in various bags; some destined for the tip, others for recycling and more still for the charity shop. My holiday packing is almost all completed too – there’s a Glastonbury pile on one side of the room and a Florence pile on the other.

There’s something immensely satisfying about having a spring clean, especially in the run up to a life change such as moving house. It makes you feel that you’re throwing out the old and embracing the new and is, in essence, as much a spring clean of the soul as of material possessions. It’s also bloody knackering – if you’ll excuse my French – so for the rest of the day I plan to take it very easy indeed! 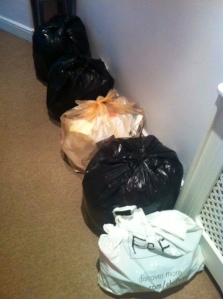