It’s 6.09pm as I type this and I’ve officially finished work. All that stands between me and Glastonbury 2013 is an evening of last minute packing, a few brief hours’ rest and a three and a half hour coach ride to the site in Pilton, Somerset.

My first experience of the festival in 2005 was somewhat traumatic. A festival (and indeed camping) virgin I’d arrived fresh-faced with my pink two-man tent and solar-powered shower, completely oblivious to the reality of what I was about to endure. Which was, in short, four days of torrential rain (and by torrential I mean on the first night it rained so hard peoples’ tents were washed away and police divers were called in to retrieve their passports and valuables).

When I returned in 2008 the weather gods were marginally kinder. As I recall it only rained for half of the festival, but when you’re trying to negotiate a site that big even the smallest amount of rain can play havoc with your enjoyment of the general experience.

Although this year the forecast predicts some light rain showers, it’s looking like we may avoid a total wash out (she says, crossing fingers, toes and everything in between). But nonetheless I shall be packing my wellies and my mac – I know too well the British forecast should never be trusted…Wish me luck! 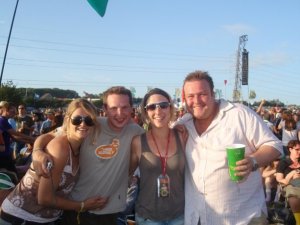