This evening I’ve offered to go and cook dinner for my best friend, who has been in plaster from her ankle to her thigh for the past few weeks with a hairline fracture (and who, as an aside, lives on the third floor of a building with no lift-bad enough without a heat wave, unimaginably horrible with one).

After a few post-work Pimm’s with colleagues the conversation turned to what I planned to cook for the aforementioned dinner. Clearly given that a) it’s already 7.10pm as I write this and b) my kitchen capability may be marginally impaired due to having imbibed several glasses of Pimm’s prior to the act of cooking, it needs o be something simple-most probably a stir fry almost identical to the one I’ve been eating for dinner every night so far this week.

This lack of culinary imagination leaves me feeling that I’ve let myself down. I wouldn’t say I’m a good cook but, provided I have a recipe in my hand I’d say I am at least a competent one. The problem is I’ve grown lazy, and at the end of a long day I tend to revert to type and cook whatever comes to mind most readily instead of taking time to consider a more exciting option.

I’m hoping beyond all hope that when I  move into my new pad next week I will take the time to reignite my passion for creativity in the kitchen, because once I start I often find it very therapeutic. As with so many other things in life it’s all about getting into a routine that after a while feels completely normal instead of feeling like an effort.

Put simply, it’s time to ditch the packet noodles and branch out into more exciting fare. Life may well be too short to stuff a mushroom, but it won’t kill me to stuff the odd pepper once in a while. 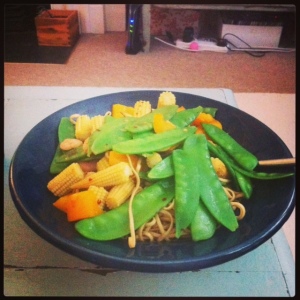