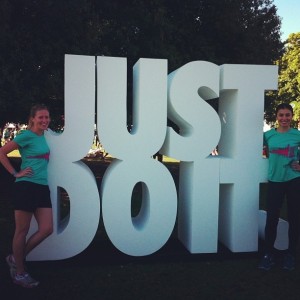 I thought this had uploaded last night but evidently not (thanks Dad for pointing it out!) – in my post-race haze I must have neglected to check before collapsing into bed, but I did write it on time, honest!!

I did it-completed the Run to the Beat half marathon in 1 hour and 56 minutes, which was just inside my target time of two hours. I’d like to say it was easy but it was actually pretty tough-in particular the final couple of miles which were mostly dominated by a horrendous hill.

I’ve got to say I was unimpressed with the general organisation of the event-at around the three mile mark there was a bottleneck getting into part of the course where there was a hydration station which brought the people queuing to a total halt (and which was obviously frustrating for anyone looking to complete the race in a target time). The music stations were a shambles too, some weren’t even manned with djs which I thought was a poor show considering everyone had been charged £49 to participate in what had been billed as ‘London’s only music half marathon.’

To be honest I think the concept as a whole is flawed because the static music stations can only be heard by the runners for such a short time, and there are big gaps between them when no music is playing at all. Personally I think a silent disco setup would work better-give everyone headphones to run with and have different channels playing different djs that they can choose between as they run. But then what do I know, I’m just a lowly (and now also very sore) runner…