Sometimes in life things happen that shake your faith in all that’s good in the world in ways you never imagined possible. One such thing happened last weekend, when a new friend was tragically killed in a car accident. I say “new” friend because we had only met him and his beautiful girlfriend two weeks previously, at the wedding of a mutual friend in Scotland. As fate would have it Travelodge had overbooked and as a result the four of us were selected by the bride and groom to share a luxury lodge in the grounds of a 5* hotel. The lodge overlooked a golf course and was absolutely charming. Needless to say we had a wonderful weekend, not only at the wedding itself but also at the hotel the next day, where the four of us made full use of the spa facilities, sitting in the jacuzzi and sauna for an age and even sampling the kids’ water slide (!) and the mini golf in the grounds (or rather, the boys played mini golf whilst Sarah and I faffed around in the changing rooms-standard female behaviour). When we said goodbye we vowed to meet up before Sarah and Paul went back to Australia, where they’ve been living for a year. Though we hardly knew them we felt that exciting spark of possibility, the likes of which become rarer with age. We sensed we might just have met friends for life, and it was a lovely feeling.

To say it was a shock to hear from Sarah last week and find out Paul had been killed in an accident the previous weekend would be grossly understating the breadth and scope of emotions that accompanied such tragic news. A tidal wave of sadness washed over me. Then, as the flood waters began to recede just a little, came a powerful aftershock of anger. I’ve struggled with the concept of religious faith for many years, and this has rocked the foundations of my fragile beliefs more than anything I can remember. I always felt deep down that everything happened for a reason, but now I’m floundering and at a loss for what possible reason there could be for such a wonderful human being to be taken away in the prime of his life, leaving a trail of sadness and a gaping hole in his wake.

If there can be any solace at all from this utterly tragic loss it is that we have gained a wonderful, warm-hearted and genuine friend in Sarah, and that we have seen true friendship in the coming together of Sarah and Paul’s friends over the past few days. With what little faith I’ve managed to cling onto I am praying with all my might for Sarah and all of Paul’s friends and family, that they may find the strength to get through this awful time. And I’m thanking God for having brought Paul into our lives, even though it was for such a painfully short time. 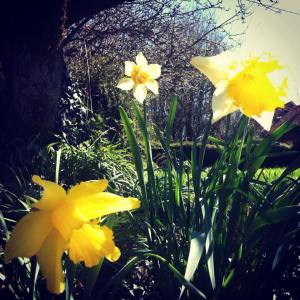 1 thought on “Sadness, and new friends”