I’ll admit it: I love panto. Not a sentence I would have been caught dead saying a few years ago, but now I’m getting on a bit (having reached the grand old age of 32) something’s changed. The embarrassment of youth has faded and, in its place, a newfound respect for the magic and comedy of pantomime has sprung up (rather like Jack’s beanstalk, if you’ll excuse the simile).

The thing is this: Life can be too serious. Bad things happen to good people; death, disease and poverty are rife in our society. Sometimes it’s just nice (for those of us fortunate enough to have the luxury) to be a little silly; to watch something ridiculous that makes us laugh and takes us far away from reality (on a magic carpet ride-sorry), evoking the unbridled joy and innocence of childhood.

And on that note, it’s wonderful to see the enjoyment that the children in the audience glean from a good pantomime performance. When Wishee Washee throws the sweets and a mad scramble ensues there’s a palpable sense of delight that’s hard to manufacture in these modern times of computers and smartphones.

What I’ve loved most of all about the pantomime at Windsor for the past few years has been (and here’s another sentence that I never envisaged saying) Britain’s Got Talent’s Kevin Cruise. The best supporting actor I’ve seen in years, he’s a true comedy talent and national treasure (also someone I’d quite like to be my male best friend).

In short I think it’s safe to say that panto’s a tradition that’s set to stay in my family (oh no it isn’t…). Roll on next year… 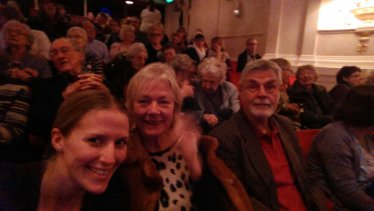