There’s nothing like a bad traffic jam to bring out the worst in people. Today I spent five hours in the car covering a distance that should have taken three and a half hours. There was an accident on the M5 (allegedly, though I saw no evidence of this when I passed the police cordon after spending forty five minutes at a complete standstill), and by the time I pulled off the motorway for a much needed caffeine fix it’s fair to say my mood was considerably damper than it had been when I embarked upon my journey.

Back on the motorway the “accident” cleared and I was on my way, practically tasting the delicious freedom at my disposal. Unfortunately, however, an urgent toilet break at Exeter  that saw me crossing three lanes of traffic without properly completing my mirror, signal, manoeuvre procedure led to a rather offensive dressing down via the medium of sign language from an irate man in the car beside me. And so the journey continued.

After what felt like an age I pulled off the final dual carriageway and began making my way through the country lanes towards my destination. It was at this point that the road in front of me was blocked again; this time with sheep rather than people. This was not, it’s fair to say, to be my day.

Thankfully I did eventually reach my destination, a place I have no intention of leaving for the next thirty six hours until it’s time to drive back up to Heathrow for my flight to Hong Kong on Sunday. Read that and weep abusive driver…. 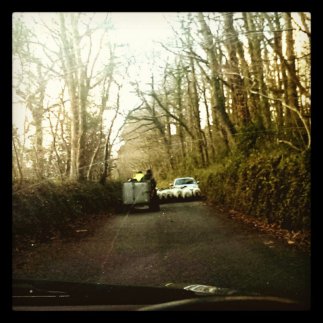