Few could fail to have been moved by the recent news (and news reporting – but that’s an inflammatory issue for another post) of American journalist James Foley’s death at the hands of Islamist militants in Iraq, or haunted by the images below of two of the many Yazidi girls who have been caught up in a war that’s not of their own making – one who looks little older than a child but is forced to carry a rifle to protect her family. Such stories and images are heart breaking, but, for westerners, it is still somehow so hard to grasp that atrocities like these are taking place on such a large scale when the comparatively ‘civilised’ society in which we live is at the opposite end of the spectrum of humanity.

So many terrible, evil things are happening all around the world, and though we fortunate folk may feel sickened, we also feel powerless to help. And, granted, when it comes to the poor souls being persecuted in Iraq, Syria, Gaza and all the other places where oppression, violence, corruption and hatred are as widespread as the oceans between us, we ARE powerless. But there is one thing we can do: Reach out to the people in our immediate vicinity, undertaking acts of kindness that will bolster the collective morale and prove not only the strength and beauty of the human spirit, but also that goodness still exists in the world. Just like this man, hairstylist Mark Bustos in New York, who gives up every Sunday to roam the streets in search of homeless people who need a haircut, whilst his girlfriend takes the trouble to ask them what they want to eat (rather than giving them scraps and leftovers). You might think a haircut is a shallow thing, but he said this of one of his most memorable beneficiaries:

“After offering him a haircut and whatever food he wanted to eat, he didn’t have much to say throughout the whole process, until after I showed him what he looked like when I was done … The first thing he said to me was, ‘Do you know anyone that’s hiring?'” 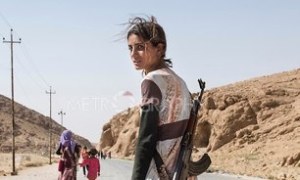