Though it breaks my heart to trample your enthusiasm (for which, I must admit, I do admire you) beneath the giant foot of my disinterest, I do believe it’s in your best interest in the long term. I’m guessing by your bright eyes and earnest expression this is new to you and you’ve yet to experience the crushing blow of multiple defeats. But soon I fear this house of cards you’ve built will come crashing down around you and the grim reality will wash over you like a tidal wave, drowning your hopes and aspirations in the torrent.

Let me paint you a picture of your typical client. A frazzled office worker, this person spends their days juggling so many metaphorical balls and treading so many deadline tightropes that they may as well be in the circus. On those rare and precious occasions that they are unshackled from their desks they like to float aloft their glorious daydreams of escape to tropical climes. When faced with the dreadlocked exuberance of youth in human form holding a clipboard, therefore, they are understandably reticent to engage in banter, no matter how jolly that banter might be.

The thing is this: We understand you’re raising money for the kids/dolphins/blind one eyed tree frogs, and it’s not that we’re cold-hearted bastards who don’t care a jot for the future of this planet we live on. It’s just that our time is short, and those of us who are of a philanthropic persuasion will mostly already be signed up to a two pound a month direct debit scheme to help our chosen cause. We are not, therefore, about to waste your time and effort by listening to you touting your cause.

I don’t mean to be cruel, you really do seem nice, but why not take that sunny disposition somewhere where it’s appreciated, before it gets ground out of you by the army of grim-faced commuters who pass by you, unseeingly, each day? Put your clipboard down, son, and get a job on the frontline of Greenpeace, if you must, or maybe in a bar in Ibiza or a theatre school in west London? The world is your Oyster, so step aside and let us Oyster card holders be.

John Doe woke to the sound of rowing neighbours and the view of his alarm clock’s blinking red light. In two minutes the alarm would sound, a siren call demanding he rise and actively participate in life. He reached out to flick the switch that would silence it before it began, a fleeting flicker of satisfaction rippling across the otherwise flat vista of his personal horizon.

He washed and dressed, then carelessly threw some cat food in the bowl as he exited the kitchen. As he stepped out into the street he paused to look up at the sky. He sighed. It was another grey day after a succession of equally grey predecessors. As he walked towards the train station it began to rain. He had no umbrella.

The train platform was crowded, five deep in sleep-deprived commuters, not one of them wanting to be where they were. John Doe positioned himself just back from where he knew the doors would be. Fat rain drops splashed onto his cheeks. Next to him a fat woman jostled for space for her obscenely large breasts. A man coughed in his face.

The train pulled up and in the ensuing scramble someone stumbled, cried out. But, intent on catching their trains, not one person helped their fallen comrade. She was a businesswoman, early thirties, or so John Doe suspected. As the doors closed inches from her face she pulled her skirt down to cover her modesty and slowly rose to her feet, cursing as the blank expressions of those who had safely boarded the train began to move.

John Doe moved into the space that had been created by the evacuation of the other commuters from the platform. The businesswoman, having recovered herself, stood beside him, a scowl plastered on her otherwise pretty face. A tidal wave of people rose up from the depths of the tunnel at the end of the platform, spilling over the lip of the top step and thronging all around them.

A disembodied voice announced the next train would be five minutes late, and a collective sigh breathed through the impatient crowd. Behind him John Doe heard a woman with a high pitched voice screech into her phone that she was about to miss a meeting.

After five minutes the train had still not arrived, and frustrations were at fever pitch. There were now so many people on the platform that John Doe could feel a pressure against his back as they forged ever forward. A woman – perhaps the businesswoman, though John Doe could no longer be sure – shouted, begged for people to stop pushing. But still they pushed.

As the train finally pulled into the platform there was a blood curdling scream. The commuter mob swayed uncertainly. Another scream, more prolonged this time, followed by a man’s voice: “For Christ’s sake, move back!” Eventually the message filtered through and the swarm retreated, parting ways enough for everyone to see the twisted form of John Doe splayed across the track. 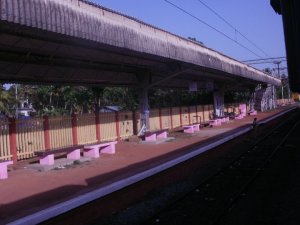 Rather different from the ones in central London…