Weddings are expensive, I get it (trust me, after a year of planning my own, I really get it). And for the most part I also get why. If you’re fortunate enough (as we are – just) to not have to sell a kidney to pay for the event, it’s really jolly nice to have a ceremony, slap up dinner and after party with your nearest and dearest, in honour of your most auspicious and romantic union (which, all being well, will be a once in a lifetime occasion).

If you want to seal the deal in a hotel, assuming that hotel is on the nicer side of decent and you aren’t best mates with the owner, it’s going to cost a pretty penny. Fine. Everyone expects to spend a bit on the location, right? Same goes for the food, the booze, the dress – I could go on. But when it comes to what the bride wears underneath her dress, well, I’m afraid that’s where you lose me on the wedding sympathy scale.

Not that I’m keen to go into details of my smalls drawer in a public forum such as this, but for the sake of argument I’ll admit: I’m not big on underwear. Not in the sense I don’t wear it (what do you take me for? I’m not some sex starved, hormone-addled teenager), more that I don’t spend swathes of cash on expensive matching sets of it. Never have, never will. Don’t get me wrong, I like a nice bra and pants, and if M&S have got an offer on I’ll bite their hand off on a 3-for-2 deal (especially if the bra straps are detachable – instantly doubles the practicality rating). But whilst I like to look nice for my man in the bedroom as much as the next girl, I just can’t bring myself to waste money on something that so rarely sees the light of day.

So you can imagine my horror when, last weekend, I set out on a mission to find my bridal underwear at a cost that wasn’t eye watering, only to discover that EVERY set of bridal underwear in the whole of Brussels apparently IS. I started with two high end boutiques, knowing full well these would be the upper end of the scale. The sales staff were all smiles to begin with, but as soon as it became clear they weren’t making an immediate sale (200 Euros for a BRA? I don’t think so, love) turned sourer than off milk. One woman even replied to my comment about wanting to consider other underwear with ‘but we have everything here, why would you go somewhere else?’ So far so bad.

Next up, the ‘mid’ (ha!) range stores, slightly upwards of high street but still with a boutique feel. Here I found one bra that I really liked, with pretty lace detailing. But when the shop assistant told me the price – 160 Euros for the bra alone, and a further 60 for the scrappiest ‘thong’ I’d ever laid eyes on – I just couldn’t swallow it. I also failed to see the romantic element to the pair of ‘wedding night’ knickers she brazenly tried to flog me, with their less than alluring HOLE in the back (refer to previous point about not being sex starved teenager – am also not sex whore).

So, off I went to the Brussels equivalent of Debenhams, confident I would at least find something suitable and within my price range there. Within the price range, yes, suitable? No. Out of an entire department of lingerie there were just two possible options, neither of which looked particularly nice on. Feeling dejected, I began walking home, and, on a whim popped into Etam, which I remember fondly from (the irony) my teenage days. And guess what? There, in prime position, was a brand new range of satin underwear in a lovely selection of suitably bridal colours, with a set of underwear retailing at the princely sum of 50 Euros. AND it was buy one get one half price. Needless to say I snapped up two sets and a few extra pairs of pants to boot. Total price: 117 Euros. 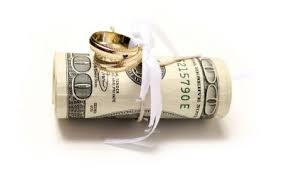