Today things feel a little bleak. On a global level, in five days of office Trump the Tyrant has ridden roughshod over the environment, women’s rights, freedom of speech and now refugees, ushering in a new era of legitimised fascism along the way. On a personal level, my spirit is feeling dampened not only by the events in the US, but also by the plummeting temperatures across Europe which signal further devastation for homeless refugees, the crazy levels of air pollution in my old home town of London where many of my friends still live, and the fact I am under too much pressure at work and don’t know how I’m going to juggle it with the masters degree I’m starting next week (next week!!). In short, I feel helpless, and also a little hopeless.

But – as life sometimes has a way of doing to drag us out of our despair – a chance encounter with my local florist this afternoon when I stopped by for tulips for our cleaning lady (whose brother recently passed away) reminded me why it’s so important to have hope. We got chatting about how beautiful the flowers were, and she told me she had quit her office job some years ago for a simpler life. Despite earning less money now, she told me she is far happier. She then asked about me, and, when I told her I was soon to start an MSc in Positive Psychology and Coaching Psychology and had aspirations to be a freelance wellbeing coach she said “the world needs people like that more than ever now.” I felt a surge of optimism at that, and a renewed sense of purpose. And to remind myself of that I bought this beautiful pink orchid. 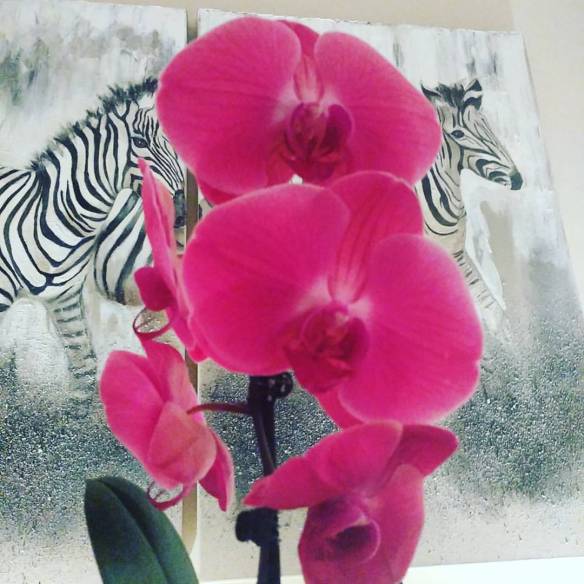 When I got home I was delighted to see that Greenpeace had unfurled a ‘Resist’ banner right outside the White House, and to read that a group of scientists are coming together to march on Washington in protest against Trump’s gagging order against employees of the Environmental Protection Agency (EPA). Also heartening was the Badlands National Park Twitter account which sent out three messages on Tuesday promoting climate science despite the Trump administration crackdown on agencies communicating on social media. Since then they have been forced to delete the tweets, but an alternative Twitter account has sprung up which already has 575,000 followers.

This growing groundswell of angry defiance in response to people like Trump must spur us all into immediate action, because action is all there is now if we are to stand up to what is so patently wrong – to save ourselves and our planet.

As tempting as it is to wallow in depression at the future of humanity after today’s horrific massacre of satirical cartoonists in Paris, to do so would achieve one thing and one thing only: It would mean the terrorists have won.

Whilst it’s heartening to see the numerous messages of support for the victims (and indeed for freedom of speech itself) on social media, as well as the hastily organised rallies across Europe and the newly created cartoons in response to the tragedy, less heartening is the hashtag #killallmuslims, currently trending on Twitter.

It is sadly inevitable that the events of today will lead to reprisals against innocent Muslims, as well as the usual torrent of ignorant comments about religion being the root cause of all evil. But as British journalist Emily Davis succinctly put on Twitter in the aftermath of the incident: “Islamic extremists. Not Islam. They are different entities and shouldn’t be casually associated. Terror has no religion.”

Terrorism in the name of religion is NOT religion, but rather extremism based on a warped perception of it. As someone who has grown up in a household with religious leanings, I have witnessed the positive side of having faith, such as the sense of community and charity that it fosters. Blaming religion in all its forms for this kind of evil, extremist activity is almost as ignorant as the terrorists themselves. Not only that, it instigates a misguided campaign of hate against innocent people who are merely trying to follow their religion in the name of peace.

If only we could all learn to practice tolerance and acceptance, we might yet be able to pull ourselves back from the brink of what could well be the end of civilisation as we know it. Hate is not the way to fight hate. The only thing that will defeat it is love.