She had come to this place in search of solitude. It was not so far from the beaten track, a mere fifteen minute taxi ride out of the heaving metropolis that was Kuta. But it was far enough to feel cleansed of the inherent grime that everything in Kuta seemed somehow steeped in, not least the throngs of intoxicated teenagers who lined the street each night after dark, preparing their drink-addled bodies for round after relentless round of vile neon shots. She was far from being a prude or a bore, but something about Kuta had unsettled her, made her feel unsafe and ill at ease. It was as if the town itself was intent on self-destruction and, as such, was taking all who resided there along for the downward spiral of a ride.

The taxi pulled up outside a delicate set of wrought iron gates. She climbed out and paid the fare, hoisting her rucksack onto her back as the taxi pulled away. Set into the lemon-washed wall was a buzzer, which she duly pushed. Moments later a man in a white linen uniform appeared to unlock the gate. He apologised that the owner of the property would not be back until later, and took her to her room. It was a decent size, with flagstone flooring that was cool under foot and a beautiful handmade patchwork quilt on the bed. But it wasn’t the room she had been promised – the room above the swimming pool, which looked out across the paddy fields. This was what she had come for.

The room – her room – would be occupied for a further night, she was told at reception, where two western tourists lounged on oversized cushions beside the small yet beautifully maintained swimming pool. She had felt a stab of disappointment to find other westerners in residence, having naively believed that she alone had found this calm oasis. This was not what she had expected, and a knot of anxiety formed in the pit of her stomach which she repeatedly tried – and failed – to ignore. She asked after food, was told she would have to venture out or order takeaway as they didn’t prepare food on site.

There was nothing else for it. She would go for a walk, explore the local area. Find food. After twenty minutes she realised she was walking in a big circle. She had not passed a single food vending establishment and was beginning to feel tearful when she saw a sign further down the road from where she stood. On closer inspection she saw it was a café. Relief flooded through her as she sat on a red plastic chair and waited to be served. But there was no sign of the owner. Instead, a curtain behind the counter twitched and two high pitched giggles could be clearly heard from the other side.

First one face, then the other, came into view. Two little girls peered out at her. She smiled and they disappeared in a fit of hysteria behind the curtain. The curtain moved again, this time revealing a man with a broad smile. He served her as the children ran around the table, occasionally stopping to sing her a song or involve her in their game. They shared no language but it didn’t matter. The girls were such absorbing company that she was lost in the moment, unselfconscious and somewhere near happy.

Once she had eaten, she regretfully took her leave, the girls waving sadly until she was out of view. When she returned to the homestay the owner had arrived. She too was a westerner, though she made a point of stressing she had been here for many years. She was apologetic about the room mix up, promising to get things sorted as soon as the current inhabitant checked out the following day. In the meantime she suggested her new guest might like to hire a scooter and head down to the beach.

In the absence of a better plan she did as the owner had suggested, and as the wind whipped through her hair and the sun beat down on her tanned skin she had to admit it was a good idea. After ten minutes she arrived at the beach. She parked the scooter and kicked off her sandals, stooping to pick them up from the golden sand. In front of the beach was a restaurant. She took a seat on one of the wooden benches outside and ordered herself a Coke. The beach was long and virtually deserted, save for a handful of surfers frolicking in the shallows and a couple of ponies trotting up and down, their owners on their backs.

Feeling restless, she drained the Coke as soon as it arrived, left a note under the bottle and walked down to the beach itself, covering a fair amount of ground before allowing herself to sit down near the shore. She wiggled her toes in the sand, took a deep breath and lay back with her arms flayed out either side of her. The sky was completely devoid of clouds, and she had to squint to prevent the sun from blinding her. What a ride this past few months had been. She could hardly believe it was almost over.

By the time she returned the late afternoon sun was beginning to set, reflected in the perfectly still surface of the pool. The man in the white uniform appeared with a key, handed it to her and pointed to the room above the pool – her room. The occupant had left not long after she had gone to the beach, he explained in broken English. She beamed at him and ran back to her other room to pack. Ten minutes later she was installed in her own private paradise. She flung open the shutters to catch the final rays of sun as they took one last careful caress of the green shoots of the paddy field. Then, quite overcome, she sank to her knees and wept tears of pure joy.

She had come to this place in search of solitude. It was not so far from the beaten track. But it was far enough. 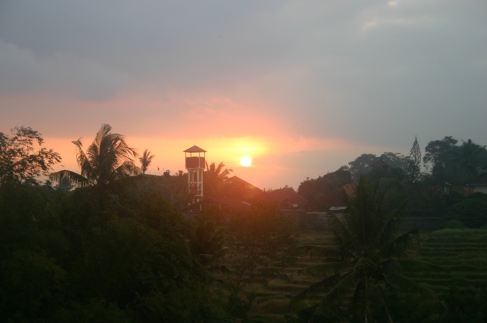 This was that place. I remember it still.