It is nearly half past twelve on ‘Writing Monday,’ and thus far I have achieved the following: A five kilometre run around Clapham Common (to offset the weekend’s beer and chocolate indulgence in Bruges); the weekly shop in Sainsbury’s; a clothes wash; a top-to-toe clean of the entire flat AND the preparation of a slow cooker gastronomic delight (lamb stew, since you’re asking) for two friends who are coming for dinner tonight. I have also, it would seem, entered into a stand-off with a lederhosen manufacturer in Germany (not a sentence I ever thought I’d write), as the product I returned last week via airmail (due to their mistake in sending the wrong size, I might add) has thus far failed to arrive, meaning that they are now withholding the replacement (in my correct size) until it does. This is a particular problem as said item was ordered for my impending birthday party, which makes swift resolution of the issue significantly more pressing. Given my recent track record with Royal Mail (two of five letters sent by my mum never having arrived), I know which side my money would be on if it wasn’t for the fact I’m already exorbitantly out of pocket from making the purchase in the first place. I could not be kicking myself more for not sending the damn thing recorded, but since they offered me free coloured contact lenses instead of agreeing to pay the return postage cost and the postage was ten pounds via regular air mail and twenty via recorded, I opted for the former – evidently a big (and costly) mistake.

Anyway, I digress. The point I’m trying to make – more to myself than to anyone else – is that it’s nearly half way through Writing Monday and, whilst the level of productivity today has seen is certainly impressive, not one bit of it has had the slightest thing to do with writing. If I was a professional runner, chef or cleaner the past few hours would at least have been lucrative. As it is, I am none of these things. No, for one day each week I am a freelance writer – a freelance writer who is very good at doing anything except the thing she claims to love. In the past ten minutes I have even abandoned my computer again to go into the roof and fix the window so the wind no longer whistles through it (though as that was, in fact, something that needed doing in order to avoid losing my concentration whilst writing that’s technically allowed, no?). To surmise, today I’m feeling mostly useless and frustrated at my own inadequacy. I may have managed to post a blog for every day of the year so far, but in terms of cold, hard cash I’ve hardly covered the cost of the lederhosen dispute with my writing, let alone made enough to pay myself a wage for Writing Monday. Still, I’m writing now, aren’t I? Even if it is only today’s blog? And anyway, we writers write for the love of our trade rather than out of any serious belief we’ll ever earn a crust from it….don’t we?

Right, enough with the negativity and introspection. All is not lost. I’ve just remembered this picture I took in Bruges yesterday and it’s buoyed me considerably. Half the writing day may have been wasted but it was wasted doing necessary things. And now there’s still a glorious half day remaining to make up for lost time. The only question now is what to write about…

Like many I was shocked and horrified to hear of the bombs that rocked yesterday’s Boston marathon, killing three – among them an 8 year old boy – and injuring many more. When I expressed my outrage at this latest tragic atrocity, however, I was shocked when someone challenged me to explain why it was any more tragic than the almost daily bombings in Iraq or Syria.

Ever since it was asked of me that question’s been playing on my mind in a loop – in much the same way as the video clip of the Boston marathon bombs going off has been played on every network since it happened. Did I feel more sad hearing about the marathon victims than when I heard news reports of innocent civilians being blown apart in Iraq? If so, what did that say about me? Was it possible some form of racism, classism or snobbery had crept into my consciousness without me even noticing its existence? Did I, in truth, value the lives of those people in Iraq less than the lives of the marathon spectators?

After a thorough period of introspection I’m pleased to say the answer to those questions was a resounding no. Whether they lost their lives in Boston or Iraq, I feel the same deep sense of sadness, the same feeling of shame that there are other human beings capable of such terrible acts of malice and hatred against their fellow men, women and children. The Boston bombings aren’t, therefore, more tragic; not at all. But, for those of us in the western world who are fortunate not to live in war torn countries, it is more shocking. Why? Because, quite simply, it’s far less common for a bomb to go off in the middle of a marathon taking place in an American city than it is on a normal day in an Iraqi city.

And there’s another reason. We see so many international news reports featuring the images of bloodied, limbless children’s corpses and wailing men and women beating their chests with grief that we are systematically desensitised to their effects. We’re used to death in Iraq and Syria. What we’re not used to is death in our own communities – or at least not the kind of death we witnessed yesterday in Boston.

No matter where terrorism strikes it sends shockwaves through not only the community whose beating heart it strikes, but also across the world. But whilst each time they strike the terrorists may think that they are winning the fight, what their hate-filled hearts will never comprehend is that through love for our fellow men it is we who will win the war. 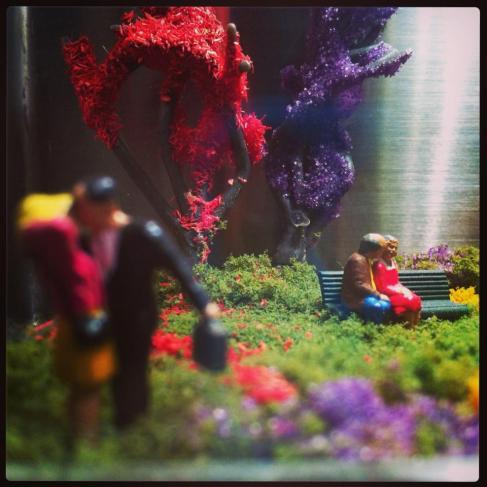 I fell completely head over heels with this, a tiny model scene in the wall of a toilet in a Manhattan restaurant. I think it’s quite appropriate given the end of today’s post.