Dawn breaks over the Agastya mountain range in southern Kerala. As the sun begins its lazy ascent from the horizon, a Chestnut-headed Bee Eater swoops across a lake, its surface so flat that the bird’s bright plumage is reflected back in glorious and unbroken technicolour. Rising from the lake are vapour trails, the ghost of night evaporating into the air and making way for day. The air is still, with no discernible sound besides the whooshing of the bird as it dips and dives down to the surface of the water. All is calm.

Beside the lake sits a man. Clothed in robes of orange, his legs are crossed, the thumb and forefingers of each hand touching one another. His eyes are closed. He looks to be in quiet contemplation, yet he is transcendent; half in this world, half in the next. No earthly troubles phase him, no thoughts chatter incessantly inside his head. He is a master of the art of the still mind, having experienced the peace that comes with being fully in the present in a way that few can comprehend. He sees in, on, above, beneath and through all things.

He is a swami, a man of great religious faith, a Hindu god-in-waiting. He sought enlightenment, and found it. He is at peace. 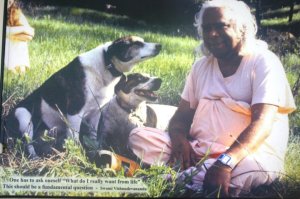 This is the late Swami Vishnudevananda, one of the two swamis who were revered at the ashram where I stayed for two weeks of last year. He was my favourite because of his big smile and open demeanour, and because of this image with the caption: One has to ask oneself, what do I really want from life? That is the fundamental question. Indeed it is Swami.