Ten years ago today, fifty two people lost their lives in London when terrorists targeted three packed commuter trains and a bus during rush hour traffic. I have a hangover to thank for not being on a train that went through Edgware Road that morning. Instead I drove to work, arriving late. When the news broke I tried frantically to contact my then boyfriend, whose journey to work took him perilously close to where the bus bomb had gone off, in Tavistock Square. But the phone lines were jammed by other frantic Londoners trying desperately to locate their loved ones, and it took over an hour to confirm that he was safe, more time still to do a head count of my friends. I remember it like it was yesterday; the panic, the sense of helplessness. It was like watching a disaster movie in real time, where the ‘stars’ could well be people you know – people you love. Just awful.

There’s something wonderfully resilient about Londoners. Even in a crisis they stand defiant. But that day tested the mettle of even the hardiest of the Capital’s inhabitants. It was a threat to everything they – we – stood for. And whilst there is, of course, the argument that our political leaders are responsible for the rise of the terrorism that now threatens our society – having provided arms and funding to the very people who now carry out these atrocities – those people who lost their lives in the 7/7 attacks, those who were injured, and the many more who will be killed and injured by terrorist attacks in the future, were, and are, innocent victims.

After work that day, at a loss for what to do and not wanting to be alone, we went to Notting Hill to try and process what had happened with friends. For as long as I live I will never forget the eerie silence as hundreds of Londoners walked past the window with their heads down; contemplating, as we were, the fact it could so easily have been them. 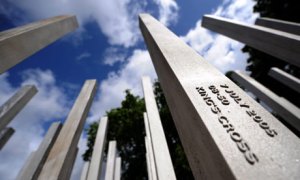