I’m not going to lie, it’s been a pretty exhausting two days, so I’ve more than welcomed the opportunity to vegetate all day today, watching back to back films (Pacific Rim, Stoner and The Hangover 3, should you be wondering-an eclectic selection to say the least) and eating Dominos pizza with my boyfriend and his brothers on his birthday. Tomorrow when the clan departs it will be nose back to the grind stone time, starting with a ninety minute run to kick start the metabolism after a weekend of booze and carbs and followed by a long writing session to begin to make up the eight thousand words I’m now behind in my NaNowrimo challenge. But that’s fine with me, because life is all about the yin and the yang, and after tipping the scales heavily in one direction with this weekend’s birthday celebrations it’s high time to reverse the trend and get back to sensible pursuits and healthy living. Move aside Dominos and partying, vegetables and sleep are back on the menu for the foreseeable future… 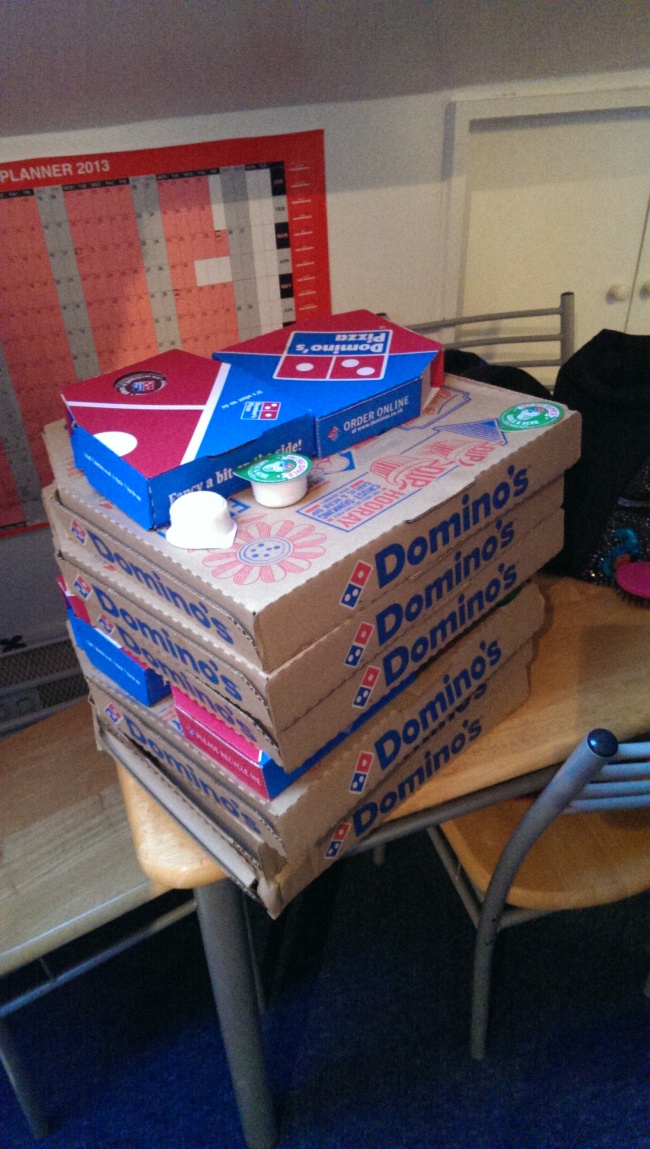 My love affair with food is a long standing one, but in recent days I’ve been teetering on the brink of overdoing it with foods so rich and fatty I was starting to feel unhealthy. Take last night, for example, when I was treated to an early birthday dinner by my best friend. After consuming a fair amount of cheese and red meat earlier in the week I decided I would order neither. And yet, when the waiter came over, I found myself ordering deep fried brie followed by duck in red wine sauce. When it arrived, the wedge of brie was almost the same size as one you’d buy in a supermarket, but did I leave some of it? What do you take me for? By the time I got three quarters of the way through the duck, however, I had to admit defeat – a rare occurrence, as those that know me will attest to.

Today I decided to start afresh with the healthy eating plan. At lunch we all went to an Italian restaurant for someone’s leaving do where I was determined to order a salad. But as soon as I clocked the £8.95 lunch deal – applicable only for pasta and pizza – I shelved my plans for a salad and went for a pizza instead. Lashings of melted cheese? Tick. Bloating and self-loathing on the side? Tick. In short, it seems I have a serious problem with self-control where food is concerned. But never mind, it’s nothing that cooking an indulgent three-course meal for friends tonight won’t cure…. 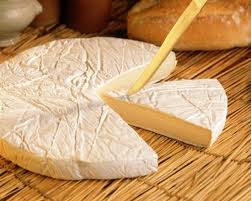 I can’t believe it’s Thursday already-it’s true what they say about time passing quickly when you’re having fun. Holidays are such an important opportunity to unwind and recuperate from the stressors of “real” life. They give the body and mind a much needed break and a chance to more fully live in and appreciate the present moment.

Holidays are also often a time when we throw caution to the wind and overindulge ourselves, and nowhere is that easier to do than Italy, where there’s gelato, wine and pizza at virtually every turn.
Yesterday we had a lazy morning before visiting one of my favourite places in Florence-the covered market. Under its vast roof lie a multitude of delicious foodstuffs. But what I love even more than the food are the cheerful vendors. It always helps to bring my Italian flooding back when I attempt to engage in pigeon Italian conversation with them, selecting cured meats and cheeses.
After buying ingredients for dinner we walked over the famous Ponte Vecchio bridge to Santo Spirito square, where my favourite restaurant in all of Florence is located-Il Borgo Antico. After dreaming of their legendary white pizza for 8 years I’m happy to say it didn’t disappoint, and afterwards we took a traditional Italian gelato to accompany a post-lunch laze in the stunning Boboli Gardens in the grounds of the Pitti Palace.
In the evening we prepared a four course feast and dined on the roof of our gorgeous apartment, which is so centrally located the Duomo is virtually within touching distance. There’s something magical about being located so high up above this bustling city, being able to look out across the tops of the buildings and have a bird’s eye view. Being back here after so many years is more than just a pleasure-it’s a thrill.

Day two of my New Jersey adventure dawned bright and clear. After our enormous dinner the previous evening we opted for a tummy friendly start to the day with some granola and yoghurt before walking the short distance to another of Jen’s favourite coffee shops/writing spots, the warehouse coffee shop. The sun hit the decking exactly where we sat so we basked in it for a while as we sipped our coffees before heading to the Path train for another river crossing to Manhattan.

Today’s activities, we had decided, would begin with a traditional tourist activity: A jaunt up the famous Rockefeller building to see the amazing panoramic views over the city. We didn’t get off to the best of starts after spending a not insignificant amount of time circumnavigating a building that we thought was the fabled Rockefeller looking for the entrance, before realising with some embarrassment that the actual Rockefeller centre was a block further along.

Fortunately we took a last minute decision to visit Dunkin’ Donuts before ascending the tower, as what we’d anticipated would be a quick up and down visit inevitably turned into a tourist honey trap full of inescapable opportunities to purchase bits of crap (a t-shirt with a metro map on it – really?) and have your photo taken in front of ridiculous backgrounds for the price of a small condominium. The views more than made up for the tourist crap, however.

By the time we were done at the Rockefeller we were ravenous (obviously), so immediately sought out the nearest Two Brothers pizza joint for a slice of one dollar (one dollar!) pizza. Seeing us struggle to eat our giant slices of pizza a British hedge fund manager sitting next to us handed Jen a napkin and said he hadn’t realised eating pizza could be so funny. We told him he should see us eating donuts, which shut him up.

After Two Brothers we decided to walk off the pizza and head to Soho on foot. But not long after we set off it started to rain so we ducked into Grand Central Station, where we saw posters advertising an art installation by Nick Cave comprising brightly coloured horses made of corn husks that twice a day are ‘brought to life’ by human performers. We spent some time wandering around the central concourse looking for the horses before realising (again with some embarrassment) that they were in fact located in the next room, and would not be performing for the rest of the day.

After the non-performing horses we walked the 30 or so blocks to Patisserie Rocco in Soho where we had the most delicious peanut butter cheesecake I have ever tasted and a cup of coffee before continuing on home to Jersey City. After a rest we walked (surely all this walking is offsetting all the food consumption – surely?) along the waterfront, taking in the glorious view of the Manhattan skyline by night, until we reached Teak restaurant in Hoboken.

Teak is a stunning sushi restaurant and bar with theatrical statues of lions on the walls and a giant fish tank running the length of the bar. As it was the start of Easter weekend the place was heaving, but after a half hour wait we managed to procure a table and settled in for some serious (and I do mean serious) sushi action. Afterwards we met Barry, a friend of Jen’s, who took us to a traditional American bar for some post-dinner drinks (cider beer’s a new one on me). Another all-American dream day 🙂 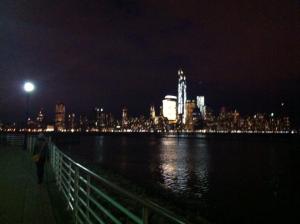