Today I took what was probably the last ride on my Norco hybrid bike. Despite the fact it has for the past five months been out of use and cluttering up the hallway of my flat so much it’s nearly made me and my boyfriend come to blows, I must admit I feel a certain sadness now the time to part is nearly upon us.

I’m neither a natural nor particularly keen cyclist, indeed the only reason that I bought the bike in the first place was because I was coerced (or was it me who did the coercing? I forget) into doing a sprint distance triathlon back in 2009. After the first sprint triathlon I did another, and last year I took on the Olympic distance. Throughout it all my trusty bike was on hand, taking me out training no matter what the weather was like outside. We had good times and we had bad times but we never gave up, and we chalked up some surprisingly impressive results over the course of those three races – results I will be proud to share with my children one day, ensuring its legacy lives on.

But since that last race back in September 2012 the bike has been in premature retirement, and spending some of the best years of its life languishing unwanted in a hallway just isn’t fair. We both need to accept that it’s time for us to move on with our lives, separately. I’m pleased to have found a good home for it with a friend who has also now committed to an Olympic triathlon next year – really, neither of us could ask for more.

And so with a heavy heart I bid my bike adieu, and wish it well for its future endeavours, whatever they might be. I’ve given it one final service and am handing it over with love. Bye, Norco, you’ve been great. Ride well and prosper.

In a little over ten hours from now I will be arriving in the market square in Kingston upon Thames dressed in my running gear and weather-appropriate additions such as hats, gloves, coats, scarves, double duvets etc (sadly I was joking about the duvet), in preparation for the Wholefoods Breakfast Run – a 16 mile jaunt from Kingston to Hampton Court Palace (twice). Despite being officially spring time in England the forecast is for below freezing temperatures and snow – wonderful. Needless to say I’m now regretting every night I chose to do a training run inside because conditions outside were too cold – not one of those occasions was as cold as this will be, so bravo me for having no practice of running in sub-zero temperatures whatsoever.

Still, if my past experience of competing in triathlons is anything to go by (and last September’s London Triathlon was pretty damn chilly let me tell you) the atmosphere and camaraderie (plus the massive bowl of rice pudding and banana I’m planning to consume at 6.30am, the packet of Dextro energy tables and Powerade I’ll be gobbling down throughout and the stonking dance play list I’ve compiled on my MP3 player especially for the occasion) will see me through – that and the thought of a nice relaxing afternoon in front of the fire afterwards.

My mother thinks I’ve taken leave of my senses with all these challenges, but, bless her, she (and my step father)’s still braving the elements to come and cheer me over the finish line. The night before a race I have to admit I do question the reason why I put myself through it, but as soon as I cross the finish line I always feel a sense of elation. There’s nothing quite like pushing yourself to the limit physically. I never, ever thought I’d say that, but it’s true. In my opinion it’s the best way to feel really and truly alive. 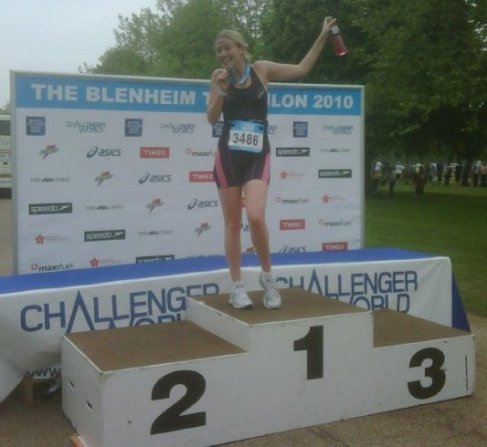 This was taken after my second sprint distance triathlon in 2010. I didn’t actually win, it was an opportunistic photo, but nonetheless I was proud of my achievement! Something tells me I’m going to have to wrap up warmer than that tomorrow if I want to avoid hypothermia…

In September last year I competed in my first Olympic distance triathlon, having tested the water with two sprint distance races in 2009 and 2010. To ensure I was fit enough to get round the course I joined a triathlon club. The first two sessions were so tough I cried, and it didn’t get much easier as the weeks went on.

By far the worst part of triathlon training for me was the swimming. As the fat kid who was always picked last for team sport at school, swimming was my arch nemesis. What could possibly be worse for a body conscious ten year old whose puppy fat stubbornly refused to disappear than shoving said fat into a tight, unflattering swimming costume and belly flopping into the pool in front of her classmates?

Fast forward twenty years and I still lack confidence in the water. Even after numerous lessons and triathlon club drill sessions I couldn’t shake the feeling I was the uncoordinated whale of the group, bringing up the rear behind the graceful, frolicking dolphins before me.

But nonetheless I fought my fear. And, whilst the mile long swim on race day felt like swimming the Channel itself rather than a lap of the Docklands, the fact is that I not only did it, I finished the race in a very respectable three hours and thirteen minutes.

Now I can’t say I’ve been back to the lido since the race (it has been winter!) but, just over three months down the line, I can feel the beginnings of that familiar fire in my belly; the seed of desire for another challenge.

When I think back to the pain of those 90 minute spin sessions, the stress of fitting training around work and social life and the general exhaustion that comes with taking on a massive sporting challenge as an addendum to normal life, I wonder if I’m mad to want to do it all again.

But then I think back to my chubby ten year old self and tell myself I’m doing it for HER-I’m making up for all the shame and embarrassment that she felt because she wasn’t good at sport in a school that valued being good at sport almost above being good at academia.

It may be time consuming, stressful and exhausting taking on extreme physical challenges, but it’s also exhilarating, motivating and a great way to keep fit.

And with this post I think I’ve just convinced myself to sign up for the sixteen mile run I’ve been deliberating over for the past few days. Here we go again… 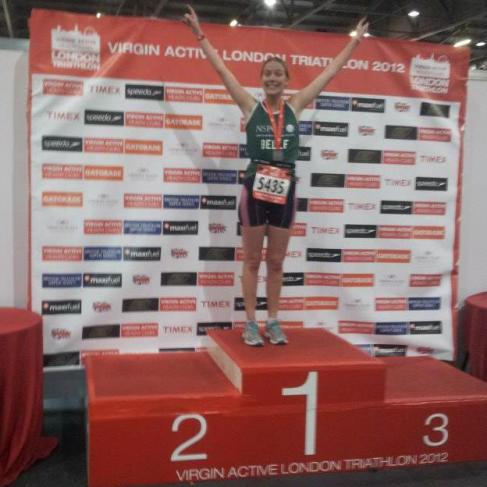 Okay, I’ll admit it, I didn’t come first. This was an opportunistic leap onto the winners’ podium post-race. But I was so elated in that moment that I may as well have won the race. It certainly lay a few childhood demons to rest.