I was walking to work this morning, entirely lost in my own myriad thoughts, when I passed a man whose appearance caught my attention. He was older than me by at least ten years, red-eyed, unshaven and carrying some bedding. It was obvious he had been sleeping rough.

When I got into work I had a meeting about developing case studies for my charity, during which I heard some harrowing stories about young people who, prior to taking part in our programme, had been bullied, thrown out of home, started dealing drugs and carrying knives..the list goes on.

Back at my desk I received an email about dementia sufferers, which said that loneliness (of sufferers and their carers) is one of the most painful and yet most under reported effects of the disease.

Why am I telling you these depressing stories? Because they’re real, and they’re all around us. Every single day people of all ages are suffering. These are extreme cases, granted, and on a lesser scale we all have our problems to work through. Which is precisely why we should treat one another with love and compassion rather than harsh judgment and criticism. I think the picture below sums this up perfectly.

Do you ever have days when your brain runs so slowly it feels like someone’s lopped the top off your head and poured in a truck load of cement? In my twenties such days could usually be attributed to hangovers and/or extreme lack of sleep, but now they seem to happen irrespective of my alcohol consumption and the quality of my nocturnal slumber the night before (which sometimes makes me wonder whether I might as well just get hammered and go to bed late anyway, but I digress…). The hypochondriac in me worries that this apparent decline in brain activity might actually be some form of early onset dementia, and that ten years from now I’ll be dribbling on myself in the corner of some nondescript nursing home, but the rational part of me says its most likely down to the typical state I seem to exist in that’s commonly known as TRYING TO DO TOO MANY THINGS AT THE SAME TIME.

Multi-tasking is not and never has been my friend, but that hasn’t stopped me trailing after it like some desperate, try-hard, hanger-on in the school playground. I should have accepted long ago that doing one thing at a time, in a linear fashion, is far more conducive to effectiveness – both in the work place and outside it – than trying to divide my attention across many. But the problem is that even when I try my hardest to focus on one thing, the others inevitably creep back into my peripheral consciousness – whether via emails, phone calls or people talking at me as I try my best to ignore them – and scupper the plan completely. Even writing today’s post has been a struggle, but now I have I think it’s time to accept the working week is over and have a well-earned drink. 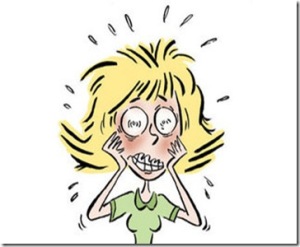