I’m writing this on the return train journey from Manchester, where I’ve spent the day meeting all my colleagues in our North West office. It’s got me thinking about the importance of face to face engagement, not just in a work context but also with friends, family and acquaintances.

As an example, how many times have you received an email from a colleague or been called by your mobile phone provider and rolled your eyes, judging their motives and pre-empting their reactions before you’ve even given them a chance to demonstrate them? If that same interaction had taken place in person, how different might it have been?

I’m as guilty as the next person when it comes to firing off emails to colleagues or texts to friends when I know I should have spoken to them in the flesh. The ridiculous thing is that it’s usually those texts and emails that need a personal delivery more than most. So whilst in the moment of deliberation and eventual action you think you’re saving yourself any trouble, the likelihood is you’re just storing it up for later.

Why are we so bad at communicating with one another face to face? The dawn of the email and smartphone age has made it easier for us to hide behind our screens, but is there a deeper motivation for our reluctance to engage with our fellow men and women? I know my dislike of confrontation is largely responsible for my shirking ‘real’ contact in favour of the electronic kind, for example, but I do wonder whether we as a species are perhaps simply becoming less inclined to be social, unless it’s a situation where we feel entirely comfortable and in control?

Not all of us are computer game addicts who hole themselves up for 18 hours a day playing Call of Duty, but I’d bet despite having hundreds of Facebook “friends” most my generation can count on one hand the number of people they see regularly in the flesh. We like to seem popular, and yet when it comes down to it we shun the majority of opportunities to really connect.

At work this reluctance can have very negative outcomes – if, for example, a colleague misinterprets an email you’ve sent in the wrong way, gets up in arms about it and shares it with other colleagues who then take his or her side it can backfire badly and damage your reputation.

The personal touch can go a long way – in today’s example, helping to bridge the gap between two geographically distant offices. We covered more ground sitting around a table together than we could have done in a month over email, and I left feeling I’d got a good understanding of everyone’s working styles and personalities – something you couldn’t hope to do on a phone call.

So if you identify with any of the above, next time you go to type an email why not stop and consider whether a phone call or face to face netting might be a more appropriate medium for sharing the information? You might just find the personal touch is more rewarding than you expected. 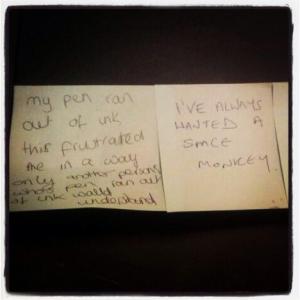 Writing this reminded me of a recent dinner party during which we played the game where you write a phrase on a piece of paper for the person to your left to slip unnoticed into conversation. If you haven’t tried it I’d recommend it!