Blankly she stares through mascaraed eyes, a soulless being with a painted face. For hours a tumultuous swarm of activity has ebbed and flowed around her. It is only now, with moments to spare, that the hurricane winds gather pace. Faceless fingers tug her hair into a style that defies both gravity and reason. Yet more tend to her nails, pinch her cheeks, tweeze her brows. Quietly she sits in the eye of the storm; watching, waiting.

From behind the chair upon which she is borne aloft a camera clicks. She smells the cloying odour of stale alcohol before she sees the photographer’s face in the mirror. Sweat oozes from his forehead like ectoplasm, sticky and wet. His lips purse, he blows a kiss at her then laughs, spittle forming at the corners of his mouth. She does not respond, merely looks away.

Her rosebud lips are painted pink, a final wash of blusher applied to the apples of her cheeks. She steps down from the chair. Her vantage point lost, she feels her diminutive stature acutely. The layers of cream and pink tulle on her princess cut dress are adjusted. Her feet are prised into crystal slippers; replicas of Cinderella’s, or so they told her. A cloud of perfume and hairspray shrouds her, stinging her eyes and throat like nettles. Now she is unrecognisable even to herself, she is ready.

The curtains pull back and she steps onto the runway, drawing collective gasps. “Isn’t she beautiful?” “What a darling little thing.” “Only five years old, you say? Well I never.” “Adorable.”

In the glare of the studio lights nobody notices the single tear that slides unbidden down her painted face, dropping from her chin into obscurity. 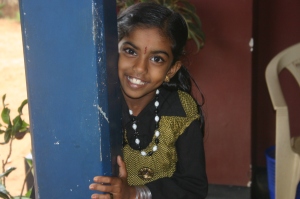 This gorgeous little girl was at a centre for disabled children that I visited in southern India. She’s quite the opposite of the girl in my story – naturally beautiful and enjoying her childhood, just as she should be.

On the stroke of midnight she is waiting for him beneath the clock, where they shared their first kiss. She totters in her heels on cobbled ground, feeling the effects of the hastily downed wine to steady her nerves. In the middle distance the sound of sirens rings out. A group of boys walk past, their expressions glassy. One makes a lewd gesture and she turns away, rolling her eyes. They leave a trail of marijuana vapour in their wake.

She glances at her watch, five past. No need to worry, at least not yet. Her skin bristles with the cold. She shivers and pulls her leather jacket tighter. The seconds tick by in stereo, her own watch echoing the steady beat of the clock over her head. She fishes in her bag and pulls out a battered packet of cigarettes, freeing one to place between her carefully painted lips. A dishevelled stranger offers her a light and she leans into the flame, feeling its heat against her forehead. The stranger walks on.

She drags deeply on the cigarette and exhales, the smoke rising into the crisp night air, signalling her presence. Her legs are blocks of ice, exposed to the elements. She tugs at her skirt in a vain attempt to cover them, and in doing so breaks a nail. She curses, flicks the cigarette onto the cobbles and stubs it out with her heel.

Ten past twelve. The seed of doubt that has implanted itself in her mind begins to flourish and grow. She slides her makeup compact from her pocket, clicks it open and observes her face in what little street light is available. Her skin is sallow and lined, her eyes are sunken. No amount of makeup can disguise her age, especially not this gauche red lipstick. What had she been thinking?

She sighs and turns away from the clock. Each tick and tock drive daggers into her heart.

Something – a noise? She can’t be sure – makes her stop. Her heart rate quickens.

It begins to snow.

I came across this beautiful old girl at Singapore Zoo towards the end of my travels last year, and she stopped me in my tracks. It makes me sad to think her kind will probably not exist a few years from now.