Having announced their engagement several weeks previously, Zachary Pontington-Smythe and Kazia Waverley-Bell are welcoming guests to the predictably lavish party that their respective families have funded in celebration of such an auspicious occasion. “I was starting to worry you’d never make an honest woman of her,” laughs an elderly aunt as she is greeted by Zachary and shown through to the main reception room by a member of the waiting staff. “No need to worry, Auntie,” Zachary replies, “I was just biding my time.” He smiles at his fiancé who, he notices, looks resplendent in the inordinately expensive vintage flapper dress and tiara she has purchased especially for this occasion, though he can’t help but feel the family jewels festooned about her ample cleavage elicit a rather unfortunate Christmas tree effect. She beams back and continues greeting their guests with almost childlike enthusiasm.

An hour into the party and the adult guests are well lubricated with the magnums of champagne that have been brought up from the Pontington-Smythe family vault. A vodka luge is attracting significant attention in the vast hallway, whilst the children are more taken with the chocolate fondue fountain outside on the terrace. Nobody notices Kazia’s polite refusal of a second glass of champagne, nor the way she rests her hand on her slightly burgeoning belly. Nobody, that is, except for Zachary’s eagle eyed and ancient grandmother, who sits in a corner of the room like a stone gargoyle, watching.

By ten o’clock the festivities have escalated to parlour games and sherry. Kazia has settled on a comfortable lounge chair from where she has a perfect view of the assembly. “Where’s Zachary?” someone asks, and soon the murmur passes through the room like a ripple on an otherwise calm sea. Nobody, it seems, has seen Zachary for quite some time. Indeed clarification of his whereabouts is fast becoming the most popular game of the evening. The children, in particular, jump to attention from their post-sugar rush slump and shoot off in different directions in search of their elusive host.

When, some twenty minutes later, Zachary and the parlour boy are hauled up from the cellar in an alarming state of undress and are confronted by a room full of speechless people, Kazia obligingly bursts into tears and flees the room. But not before the stone gargoyle in the corner has witnessed her coquettish wink at the drinks waiter, and his protective glance towards her stomach. “And they say the aristocracy are boring,” the old woman laughs to herself. “What utter tosh.” 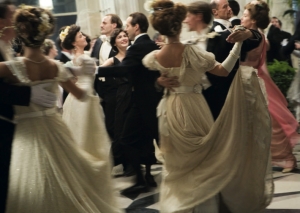 I’ve just awoken from a lucid dream about one of the characters in the novel I’m planning to write for next month’s NaNoWriMo. The details I’ve been struggling to come up with when fully conscious presented themselves, as if by magic, when I was semi-conscious. Not only that, when I fully woke up and jumped out of bed to write those details down, the ‘twist’ in the plot I’ve been scratching around for over the past few days popped into my head, just like that. All of a sudden I am no longer ill at ease with my plot, but positively in love with it. There may still be (many) details to work out before I’m ready to start writing it in thirteen days, but instead of dreading it I now can’t wait to get cracking.

THIS feeling is what the writing process is all about, and it’s a feeling I haven’t had for a long time. Sometimes it’s such a battle just coming up with a plot, let alone developing the characters to bring that plot alive. And my inner critic doesn’t help, making constant digs about not being good enough. That’s why I love NaNoWriMo; because for one month every year I can commit to a writing programme so intense there is no time for introspection and self-criticism. It’s pedal to the metal all the way to the finish line, and whilst it’s not easy it is exhilarating. And that’s what makes it worth every minute.

The final day of the Psychosynthesis Essentials course has now drawn to a close and I must admit I feel a bit bereft. Spending twelve hours a day with fourteen strangers on four consecutive days is an intense experience to say the least, particularly when you’re participating in experiential group work and observing one another in counselling sessions. In such an environment friendships that might otherwise have taken years to develop can form extremely quickly, which is exactly what I’ve found. And leaving the close knit group at the end of your time together and returning to the ‘real world’ can be quite an emotional wrench.

I could happily extol the virtues of this type of psychology for hours, but for tonight I’ll keep it brief and say only this: For the past eleven years I’ve been searching for a way to deepen my understanding of psychology and develop my connection with my inner self, and finally I feel I might just have found it.

Where I take things from here I don’t know – much as I’d love to do the foundation year in Psychosynthesis I’ve only just started working for the charity that was borne out of its principles, so I want to give it all my attention for the time being. Given that I’m now working part time I also don’t happen to have a few spare thousand pounds lying around, so maybe further down the line I’ll consider whether it would work to fit the course around work and how I might afford to pay for it. In the meantime I’m just happy to have had this opportunity. It’s been nothing short of phenomenal, and as cheesy as it sounds I’m certain I’m going to be a better person because of it.

Tonight I unintentionally put Professor Daniel Gilbert’s theory (which I mentioned in yesterday’s Bea article about happiness) into practice. Having woken up with a sore throat I spent the whole day feeling increasingly less keen to go to my first running club session after work. As the day progressed I thought of every excuse under the sun to not have to go. The front runner (if you’ll excuse the pun) was the fact I felt worse after running 3k at the gym last night, so running 8k outside would almost certainly make me more ill. Fortunately my sensible Twitter followers coerced me by citing the ‘below the neck’ rule, and as my lurgy was most definitely above the neck I decided I had run out of excuses and would give the run a try (I can’t deny the scone and slice of cake consumed at a colleague’s leaving do in the afternoon was also a contributing factor to my need to exercise).

I digress. So how did I put Professor Gilbert’s theory into practice, exactly? Well, I did the run, and at the end of it I thought how much I had enjoyed it and how glad I was to have done it. I even wondered why I’d made such a big deal of it and spent so long trying to talk myself out of going. What Professor Gilbert would no doubt say about this is that when imagining the run – in what was then my present – I was feeling unwell, and was only able to imagine doing the run whilst feeling unwell, which led to me overestimating how bad I would feel whilst actually doing it. As it turned out I felt much better by the time I started the run anyway, and so when the run became my present I was able to enjoy it far more than I had imagined.

Realising this has been a revelation. I’m actually rather stunned!

By the way, in case you’re wondering, I’m thinking of amending the ‘past post’ rule of this blog so that I occasionally post something I’ve written before, but it doesn’t have to be every week. I’m delighted to say I’m enjoying writing something new every day so much I’m finding I don’t want to post old pieces of work (most of which I’m now viewing with a more critical eye anyway and deciding they’re not up to scratch for publication).

Tomorrow’s the last day of January – one month done and still going strong! Who says New Year’s Resolutions are hard to keep?

Here’s the image that comes to mind when I think about things that weren’t as bad as I imagined. I’d built myself up into a frenzy of worry when I did my first triathlon in 2009, but on the day of the event (as you can see in this pic) I quite enjoyed it! Bar the swimming. I bloody hated that part.